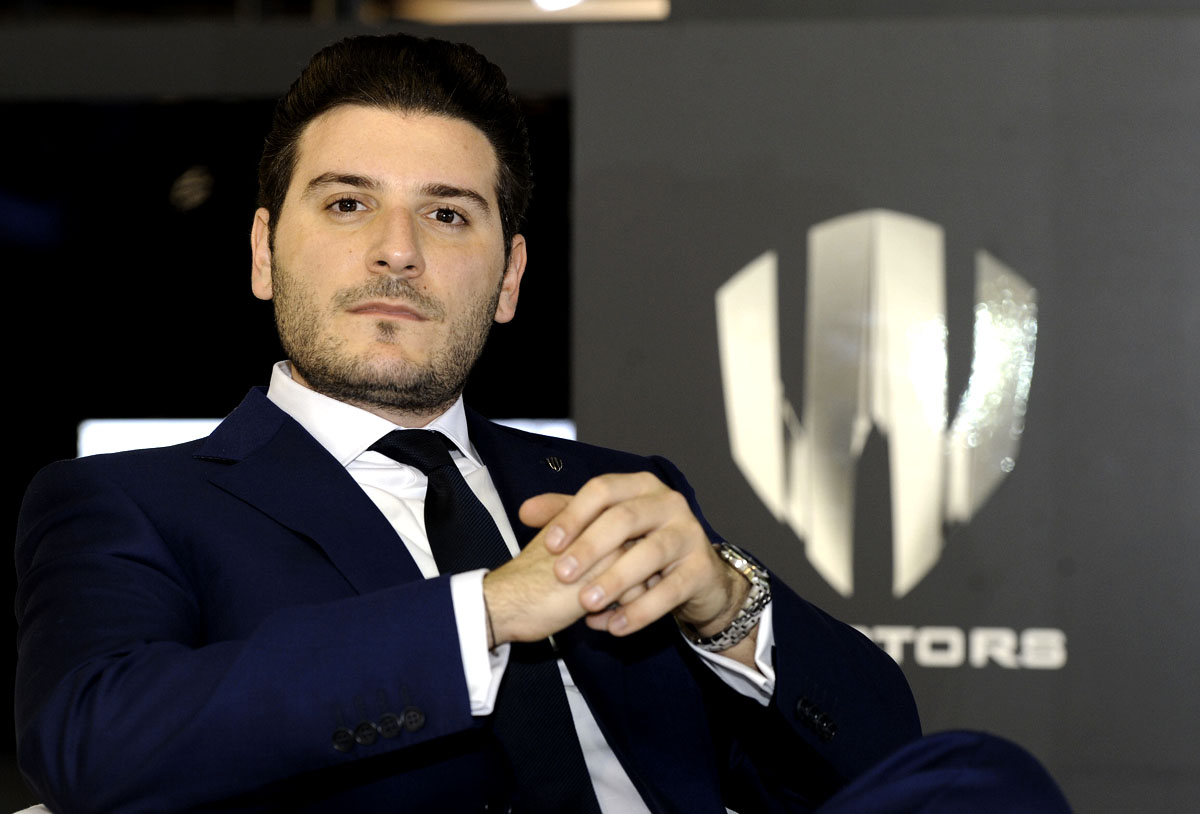 As the founder and chief executive officer of the Arab world’s first supercar company, Ralph Debbas has a clear energy about him. We have barely sat down in W Motor’s plush offices with a view across the Dubai skyline when the Lebanese entrepreneur starts talking at a blistering pace.

In a matter of minutes he takes me through everything from the childhood inspiration behind the company name, its first supercar, associations with the Fast & Furious film franchise and plans for the Arab world’s first car manufacturing facility. He is only just get- ting started.

Our story begins with a young Ralph Debbas and an automotive dream. A pursuit that took him from a master’s degree in car design, in England, to the creation of what was to become W Motor, in Leba- non. Then, following seven years of development including building partnerships with European multinationals Magna Steyr and RUF Automobile, the company was ready to reveal itself to the world.

In 2012, W Motors was established – the ‘W’ inspired by Debbas’ childhood nickname ‘wolf’ – with a mandate to become the Arab world’s first automotive design house and manufacturer of luxury supercars.

“Of course, the whole project was a challenge – building a car is not easy,” he says. “However, we played a lot on the marketing side. Announcing we were the first Arabian car brand attracted the attention of the global media.”

At the 2013 Qatar Motor Show, W Motor’s first driveable car was revealed to the world. The Lykan HyperSport, the first Arabian supercar, quickly cap- tured headlines with its $3.4m price tag, headlights embedded with jewels and a limited production run of seven units.

“From a feasibility financial point of view we couldn’t go and compete with multinationals that produce hundreds of thousands of cars,” he says, explaining the strategy. “But when you go beyond to niche categories, let’s say the $1m and $2m cars, only a handful companies produce such vehicles. So we even went beyond that to say that we are in a niche of our own.”

Although self-funded in the begin- ning, when it came to the production phase Debbas realised he needed help. It came in the form of Lebanon’s FFA Private Bank. Two years ago, the lender acquired a stake in W Motors and the company has attracted a number of other private investors since. “Every year we grow into a different stage, into a different funding injection,” clarifies Debbas.

Now, with this backing, he is looking to create an automotive legacy.

“My target was not to compete with any other manufacturers on the market because it is impossible. They have 100 years of pedigree, experience and history. We are here starting with something fresh but we’re growing it into something that took them a century.”

A huge price tag and limited edition appeal for his first vehicle was not the only ace Debbas had up his sleeve.
Two years ago, the film studio Uni- versal approached the company with a once-in-a-lifetime opportunity – to have the Lykan appear in its latest blockbuster Furious 7.

“People thought that maybe we had it as product placement but it was the com- plete opposite,” he says. “Universal got in touch with us two years ago and they requested to have the Lykan in the movie – the biggest blockbuster in Hollywood – and we built 10 cars for them.”

Having been on set for some of the filming in Atlanta, the CEO reveals that the car was adored by much of the cast and crew, including the late Paul Walker, the American actor killed in a 2013 car crash. It later appeared in a memorable scene set at Abu Dhabi’s Etihad Towers.

Those familiar with the film wil know how actors Vin Diesel and Walker discover the Lykan behind a locked door and – after discussing its specifications and exclusivity – decide to use it for a swift escape. What follows is a spectacular action set-piece. The car smashes through walls and then accelerates out of a window to land in the opposite tower under a blaze of gunfire.

As Debbas proudly explains, the Lykan was the most expensive car ever used in the Fast & Furious franchise and pro- jected W Motors to global levels of fame.

“It helped put the company on the international map and show what we’re doing in the Middle East is something completely new,” he says.

Indeed, later at a launch event for the film in Beijing the car joined the likes of Vin Diesel, Jason Statham and Michelle Rodriguez on the red carpet. Although Debbas denies rumours Diesel took a car for himself after the filming was com- pleted, revealing he was a little too big for the interior.

Just as its car had made the transition from the factory floor to the red carpet, W Motors also undertook its own shift during this period.

“Unfortunately due to the political tensions we have in Lebanon and the economic instability, we had to define another location in the Middle East for this project,” he explains.

The desert city, with its eye for luxury, was a good fit for W Motors’ ambitions – although he insists it was not just the supercar-lined streets that appealed.

“Dubai was not only about the cars, it was about the whole strategy of the city. It is growing at an exponential pace,” he says.

Now from his offices at the top of a sky- scraper in Jumeirah Lake Towers, the entrepreneur is looking to take the next step in his automotive dream.

Within a year, Debbas hopes to move the company’s assembly and production facilities to Jebel Ali in Dubai. This will mean moving some if not all of the com- pany’s operations in Torino, Italy, to the emirate including a production team of around 130 people.

In this, Debbas is not just looking at his company’s own fortunes. He sees the facility as an impor- tant first step in a region known for its love of cars but inabil- ity to produce them.

“Of course, our target is not to be the only one. It is to open the door for the next projects to come in. We’d like to show the people that it is feasible, especially in a region that doesn’t have any experience.”

This is not to say the move is without strategic merit. Despite all the regional hype surrounding the Lykan HyperSport, of the five models sold so far Middle East- ern buyers have bought none.

As Debbas explains, clients that buy the Lykan have to wait between eight and 12 months for delivery, given all of the customisation options. This has put off some would- be regional buyers who prefer to pur- chase a supercar and leave in it the same day.

For his next vehicle, the CEO has therefore gone down a less exclu- sive route. The SuperSport will be unveiled in Novem- ber with a faster production cycle to cater to the demands of Middle Eastern buyers and a lower (although by no means low) asking price. Debbas reveals approximately 25 will be produced per year, with a price tag of around $1.8m each.

The company is also looking to follow the likes of Bentley, Jaguar and Lam- borghini into the sports utility vehicle market. Plans are in place to launch the line at the Beijing International Automotive Exhibition in April.

“One line is catered more for the Middle East as an off-road luxury car. It will be built in our factory here. The second SUV is a completely new sport luxury line aimed to be the fastest SUV in the world.”

These models are designed to be much more accessible than the HyperSport and SuperSport with a price range of around $200,000 to $300,000 and pro- duction exceeding 150 units per year. Although when asked for his thoughts on the UAE’s recent fuel price increase, making vehicles like these more expensive to run, he expresses some dissatisfaction. “If it [the fuel price] keeps on going up, I think it is going to be a big problem here in the region.”

In the shorter term, W is also look- ing at an accessories line. Having already penned agreements with the likes of Frank Miller the company is eyeing a series of W Motors concept boutiques in Miami, Shanghai, Singapore and Dubai in order to showcase its hypercars and the upcoming new models of the brand.

“These are dedicated spaces to go in and buy any special items from W Motors – from the special watches to the cufflinks and the men’s accessories to the paintings.”

All impressive plans but the CEO admits when it comes to starting the engine of the automotive industry in the region, more time will be needed.

“The education is still lacking today. Maybe in 10 years or 20 years, it will be there but we need to take a step and start,” he says, suggesting the company will have a role to play in teaching design, engineering and production techniques.

“I think in 10 years, we will have a few other companies coming in. Maybe not necessarily new brands but other brands relocating facilities to the region to get the image, to get the exposure and to pro- duce cars more cheaply than their home country. Europe is becoming very expensive today.”

Still, having achieved in years what some companies have taken decades to do, there are few better men to lead the charge.