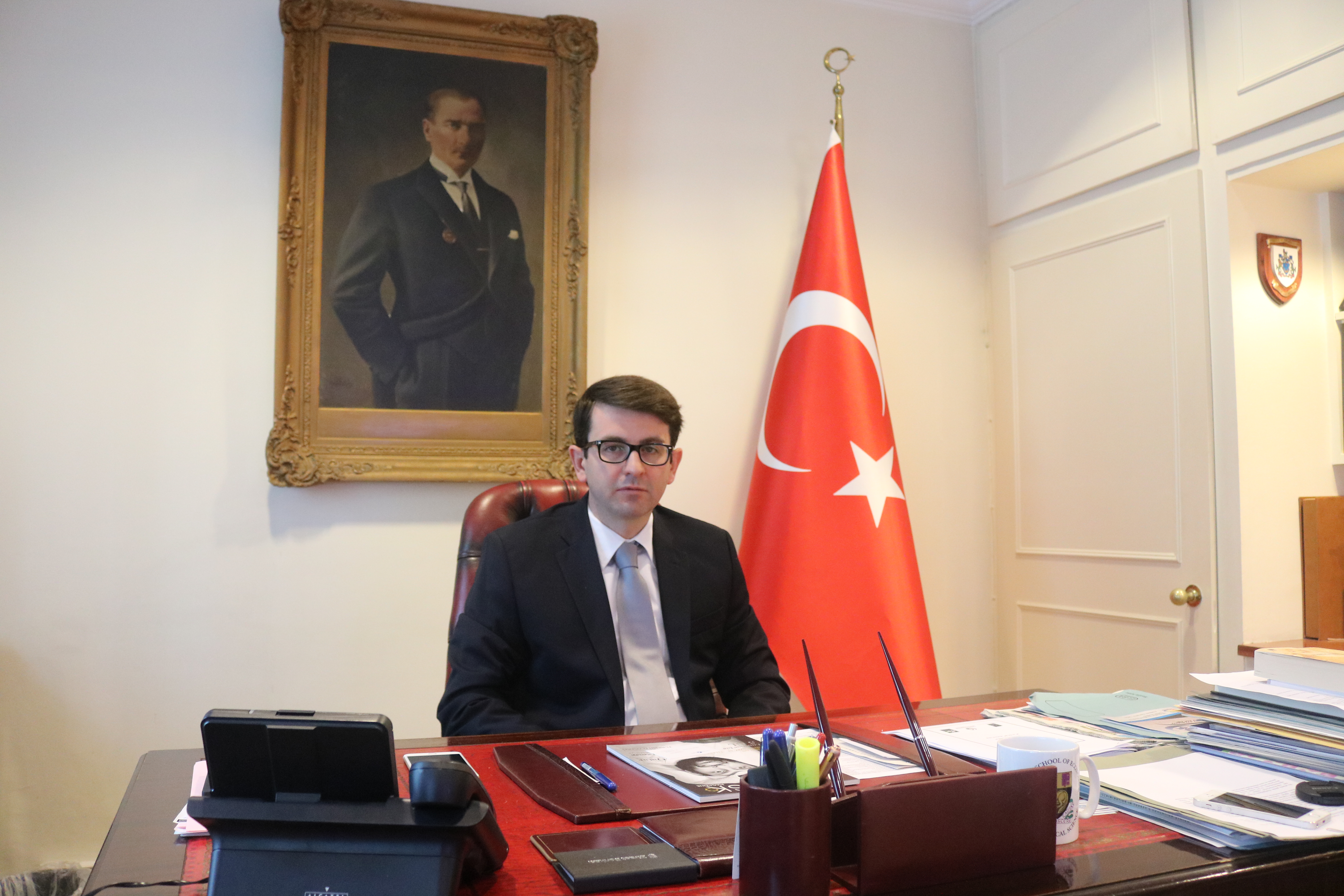 Turkey after the recent parliamentary elections will enjoy political stability that would reflect positively on the Turkish economy as well as on investment environment.

The Arabic – Turkish relations has been changed in the past few years, and Turkey acquired new real partners in the Arabic countries in addition to the popularity of Turkey among the Arabic youth, that’s what brought our magazine Arabisk London to meet His Excellency – Dr. Emirhan Yorulmazlar to talk to us regarding the consulate work and the facilities and services that they provide to the investors and other applicants. 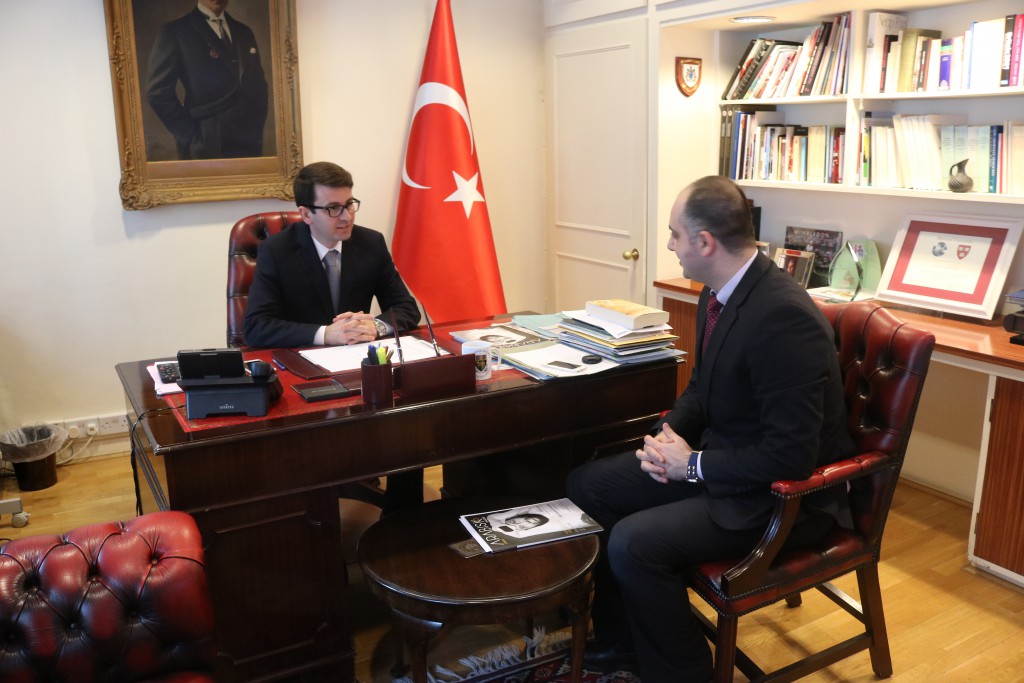 If we talked about the experience of the recent parliamentary elections and how was your role as the Consulate General in regards of organisation and management?

We organised the first elections abroad in August 2014. It was the presidential election and the turnout was weak to some extent, and this was due to the fact that voters did not have registered their names in the electoral lists. Yet the situation changed completely in the first parliamentary elections as well as the recent parliamentary elections, which we realized in 22-25 October 2015, where the number of voters rose almost sevenfold for the presidential election compared to the first elections organised in the United Kingdom. The elections have been processed in 50 countries, including Britain and more than 37 thousand Turkish citizens voted in the election centres in London, Edinburgh and Turkish border gates.

What kind of a role did you have as the Consulate General in terms of increasing the Turkish nationals in Britain to participate in the electoral process?

Certainly through newsletters that we have issued, as well as various announcements about the importance of the participation of Turkish citizens in voting for the political future of their country. We extensively used the media channels (local Turkish papers and social media outlets) and facilitated the registration of voters. Even during the election day, we kept the Consulate General open for issuing identity cards to let our citizens vote. Overall, we espoused a facilitative approach to increase the number of voters.

As we know that your role as the Consulate General is management of the affairs of Turkish citizens in the United Kingdom, but the question is what are the services you provide to non-Turks?

We provide all the services of visa and work permits as well as providing the information they need, whether as tourists, students, researchers, or investors. The Turkish Consul General has always shown readiness to provide them links with the relevant departments or companies that can benefit them in their exchanges in Turkey. Our role here and in cooperation with the Turkish Embassy is to make Turkey a comfortable and well-known and attractive destination by providing all the necessary facilities and information for the investors or tourists. As you know Turkey is open also for real estate investments and a popular destination on that note. So, we are also ready to link them with our relevant authorities both here and in Turkey.

Recently we started to see a lot of Turkish high street brands in the British market like:

How do you see the entry of Turkish brands to the British market, is it competitive compared to the European brands? And what’s your role as the Consulate in these projects?

This is broadly true. As the Turkish economy grows, Turkish companies are opening up more and more in global markets. We started recently see a lot of consumer brands, whether in food sector or as cafes and restaurants in the British market. Yet we need to note that Turkish brands has been active in the UK for a long time. For instance, the Beko brand, which occupies the first place in the electronic durables market. Vestel also on its way to become a trademark here.

Of course what helped Turkish industry to invest abroad dates back to 1996, when Turkey joined the EU Customs Union. This was painful in the beginning, but made a difference by rendering Turkish products in terms of quality and added-value.

And on top that, as a natural consequence, the Turkish community living in Britain that now passes the two hundred thousand threshold, is very active in business and industry. They are also on their way to produce national brands in the UK and asset for Turkey’s links with both the UK and Europe in general.

What are the services that you offer to the foreign investors willing to invest and own property in Turkey?

We are doing all is necessary for facilitating their legal status in Turkey in terms of visas and work permits. As I noted, we would be ready to link them with their Turkish counterparts and the Commercial and Economic Counsellors at the Turkish Embassy in London also have facilitative roles in terms of encouraging foreign investors. Let me underscore at this point that, the Turkish government in all senses is business friendly and open for foreign investment.

What are the government’s steps to encourage private investment especially that the AK Party won the majority of seats in the parliament which is expected to ensure the stability of government’s economic performance?

Certainly Turkey after the recent parliamentary elections will enjoy political stability that would reflect positively on the Turkish economy as well as on the investment climate as a whole. The growth rates are making a comeback following a short period of stagnation (still among the highest in the OECD countries). For example, we notice the rising of the real estate acquisition movement in Turkey by investors and businessmen and also building one of the largest airports in the world in Istanbul, a third suspension bridge, and building yet another tunnel under the Bosphorus (Al-bosfor) will make the movement of transport in Istanbul easier. And we can say that there is optimism for the future of Turkey as a dynamic and young country.

Turkey in the last 10 years is quite different than before in several economic and tourism aspects and in the political role played regionally, what is the reason behind that from your point of view?

The main reason for this is that the government here was eager to develop its relations with its neighbours in all aspects from the political to commercial and cultural. I personally recount my service at the Turkish Embassy in Tehran and what made me happy there was that I used to meet people who visited Turkey and their impression was in general “they felt like at their home in Turkey.”

This is actually a significant asset of Turkey, where people from the region feel the warmth, familiarity and safety. I also think that the liberal Turkish visa system vis-à-vis our neighbours is advantegous and has been helpful in extending our contacts with the peoples. Turkey is now the place for Syrian families to meet together, as well as Iranian and Iraqi brothers, who cannot go back to their countries. Turkey’s doors are open to all and that’s what invigorates our regional role.

How is coordination with the British government in terms of promoting economic and trade cooperation?

We have good relations and high coordination with the British government from the commercial and economic aspects as well as the security aspect. The volume of trade exchanges in the past year reached 16 Billion dollars and this year will reach 19 Billion dollars and there are 2700 English trading companies in Turkey and the British are the largest investors in Turkey. Last week, we attended a meeting with Lloyd’s International Insurance Administration and discussed with us the possibility of entering the market in Turkey and I believe we will see more of English companies that will invest in Turkey.

Recently we started to see a lot of Arabs targeting Istanbul to be their first destination for tourism in addition to the increasing of the popularity of Turkey in the Arab worl. What is the reason behind that in your point of view?

This is normal because of the historical ties that bind Turkey and the Arab world. Unfortunately, after the first world war there was a gap between the Arabs and Turks, but in recent years the relationship is getting to where it should be. Turkey has a lot of investments in the Arab countries and it did not give up on Arab brothers in times of crises. We will continue to stand with Syrians, Egyptians, Libyans, Iraqis, Lebanese, and others regardless of nationality or ethnicities. From my point of view, the depth of relations between the Turks and Arabs has great potential for developing even further.

And I think what stresses more on your words and there is Arabisk London magazine here, which is primarily concerned with the Arabic community in London, but we feel proud that it is also our duty to highlight the achievements of the government and people of Turkey.

Tell us about your relations here in London with the rest of the Arab embassies and consulates, is there any kind of cooperation and coordination?

The electronic visa system (e-visa) is a recently introduced and a new system, yet achieved a lot of success where it processed six million visa applications in the past year. Actually the issue about the travel documents has been one of the ideas that we are working on. In the near future we would introduce certain measures to make it easier for travel document holders’ to be granted a visa.