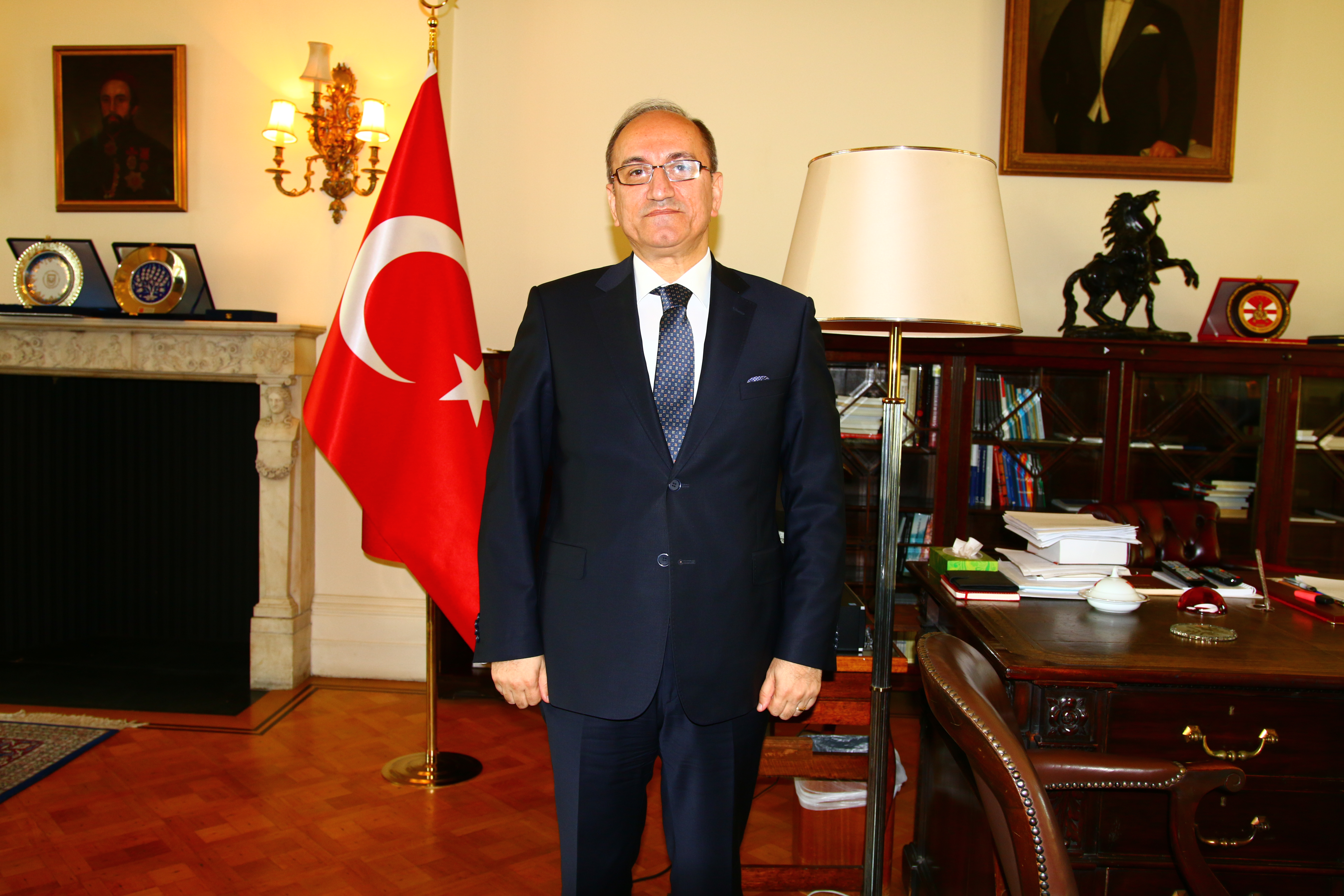 – coup attempt was a terrorist campaign to overthrow the democratically elected government.

– legal remedies are available against all acts within the the State of Emergency and in Supervision of the European Court of Human Rights.

– London is a place for building opinion on complicated matters that are on global agenda.

– Bilateral trade between Turkey and the UK exceeded 16 billion dollars.

– Strengthening cooperation between Turkey and the Gulf countries is a safeguard for the peace, security, stability 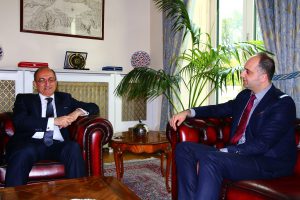 On the evening of July 15th, a faction within the Turkish Armed Forces attempted to stage a coup. We have solid proof that the Fetullah Gülen Terrorist Organisation (FETO) was behind this attempt. This was more than a treacherous plot. It was a terrorist campaign to overthrow the democratically elected government, the President and the constitutional order of Turkey. The attempt failed, leaving behind 242 dead and more than 2,000 wounded. Our citizens left their homes and stood up against the coup plotters that night. Their democratic resolve is proof by itself that Turkey will never bow to authoritarian rule.

Following this grave and violent attack against our national security, and given the fact that the FETO terrorist organisation infiltrated widely into state institutions, a State of emergency for ninety days was deemed necessary. However, due respect will be shown to fundamental rights and freedoms and the principle of the supremacy of law will be strictly observed during this process. I would also like to mention that legal remedies are available against all acts and measures to be taken within the context of the State of Emergency, including individual application to Constitutional Court. Supervision of the European Court of Human Rights continues as well.

With numerous think tanks and universities, London is a place for building opinion on complicated matters that are on global agenda. Therefore, there is much potential to further improve the channels of communication between the Turkish and Arab communities in the UK. We may further develop our cooperation and coordination on many issues of mutual interest, such as Palestine, Syrian refugees and various other matters regarding the Middle East.

The close cooperation between the two countries serves our mutual interests. The basis of this cooperation is strong enough not to be disrupted by the momentary ups and downs. Our bilateral relations with the UK continue to stay strong, despite the fact that the two countries are going through exceptionally challenging times. While the UK is trying to reformulate its relations with the EU and its international partners, following the outcome of the EU referendum, Turkey recently thwarted a severe security threat caused by the attempted coup of FETO.

The economies of Turkey and the UK are closely associated and economic relations, as one of the basic pillars of our bilateral cooperation, create further synergy to deepen relations in every aspect.

Bilateral trade between Turkey and the UK increased by 68% since 2009 and exceeded 16 billion dollars in 2015. The UK is one of top destinations for Turkish exports. We can confidently say that Turkish-British commercial relations stand strong and resilient despite current ups and downs in the global economy. Being a member of the EU Customs Union, its position as a manufacturing hub and close proximity to the UK market, make Turkey a reliable trade partner for the UK in various sectors and products. In Britain, there are various “made in Turkey” industrial goods such as 85% of UK’s non-EU imports of buses and minibuses, 11% of total imports of apparel and ready-wear, and 10% of all TV sets in the UK.

The two countries have managed to upgrade their economic relations by also cooperating in the field of financial services. Turkey attaches particular importance to increasing its global footprint in the financial services industry, and the UK stands as most suitable partner due to its unique global position in this industry. In this context, Istanbul is benefiting from the wealth of experience and knowledge of London in the financial field in its journey to become an international financial center.  Every step that can turn Istanbul into an international financial center, will certainly contribute to deepening existing the relations in financial services between Turkey and the UK.  There are numerous opportunities for cooperation, ranging from insurance and asset management to participatory finance through strong partnership between the two countries.

Turkey has taken important steps towards achieving international standards in terms of democracy and the rule of law since the beginning of the new millennium. Turkey’s strong political leadership along with its dynamic and continuously growing economy have turned Turkey into a more influential player in its region and beyond.

These changes of course bring their own challenges and risks, besides opportunities. The rise of terrorism and radical ideologies in the Middle East bred Islamophobia and xenophobia in Europe. Cooperation with our Middle Eastern and European neighbours along universal values and principles is the only way to cope with such problems.

In a sense, Turkey’s political success may also be traced back to its economic resilience. Turkey is a country not seeking an easy growth. Turkey has a long-term economic strategy which builds on the comprehensive reforms. Implementation of comprehensive reform packages helps improve the quality of institutions and boost productivity. These reforms have been devised to turn Turkish economy into a high-value economy.

Turkey’s reform programme has three dimensions: sectoral transformation reforms, structural reforms and the reforms implemented in line with the EU accession process. Well-framed reforms are heading the way for stable economic growth and positive changes in the economy.

Since Turkey emerged as a center of attraction thanks to its dynamic service sector and hospitality, Turkey has become popular not only for the Arab world but also beyond. Of course, a common history and cultural affinity between Turkish and Arab communities make Turkey destination of preference for the Arab world. I believe that we make our Arab neighbours feel at home in Turkey. The wide range of opportunities it can provide, from historical sites to wonders of nature, of course, make Turkey one of the most popular touristic destinations in the world.

We have strong ties with the Gulf countries based on common history, values and interests. We, naturally, attach great importance to security and stability of the Gulf region. In strategic terms, Turkey and the Gulf region flank a highly strategic but volatile region, and thus the two sides need to cooperate on regional issues. Strengthening cooperation between Turkey and the Gulf countries is a safeguard for the peace, security, stability and prosperity of the region. We continue close consultations on regional issues both on bilateral and multilateral basis.

Saudi Arabia is key to the security and stability of the region. We are two brotherly countries willing to strengthen our relations in all fields. Visits at the highest level are taking place regularly. Since His Excellency’s ascension to the throne, King Salman visited Turkey for the G20 Summit in Antalya in November 2015 and the 13th Islamic Summit in Istanbul in last April along with an official visit to Ankara immediate before the Islamic Summit. Foreign Minister El-Jubeir also paid a visit to our country from 7 to 9 September 2016. Our views overlap with Saudi Arabia on a wide range of regional issues. Stronger relations between Turkey and Saudi Arabia would definitely contribute to regional security and stability.

Our relations with Qatar have rapidly been developing in recent years. We have mechanisms in place to institutionalize our bilateral relations in all fields, from security cooperation to commercial relations. Recent bilateral visits have further strengthened our cooperation. Former Prime Minister Davutoğlu paid a visit to Qatar last April, and Qatari Prime Minister His Excellency Sheikh Abdullah Al-Thani paid a reciprocal visit to our country between 7 and 8 September in return.

7 . We have heard that communication channels have been established between the Emirates government and the Turkish government. What do you think about this?

Turkey and the UAE are two important and friendly countries in the region. We are keen to improve our cooperation in the field of security since we value peace, security and stability of the UAE. Our Foreign Minister His Excellency Mr. Mevlüt Çavuşoğlu paid a fruitful visit to the UAE on 25 April, upon the invitation of his counterpart. The visit provided both countries with an excellent opportunity to improve bilateral relations and discuss issues of concern to both bilateral relations and regional affairs. The Minister of Foreign Affairs of the UAE Sheikh Abdullah’s return visit is currently being planned.

We are glad that Arabisk London regularly covers tourism and investment opportunities in Turkey. We value your work, and wish you every success in your future publications.

The Business Woman Joelle Mardenian :A success Story From London To Worldwide