A Qatari delegation from 20 organisations in Berlin's ITB 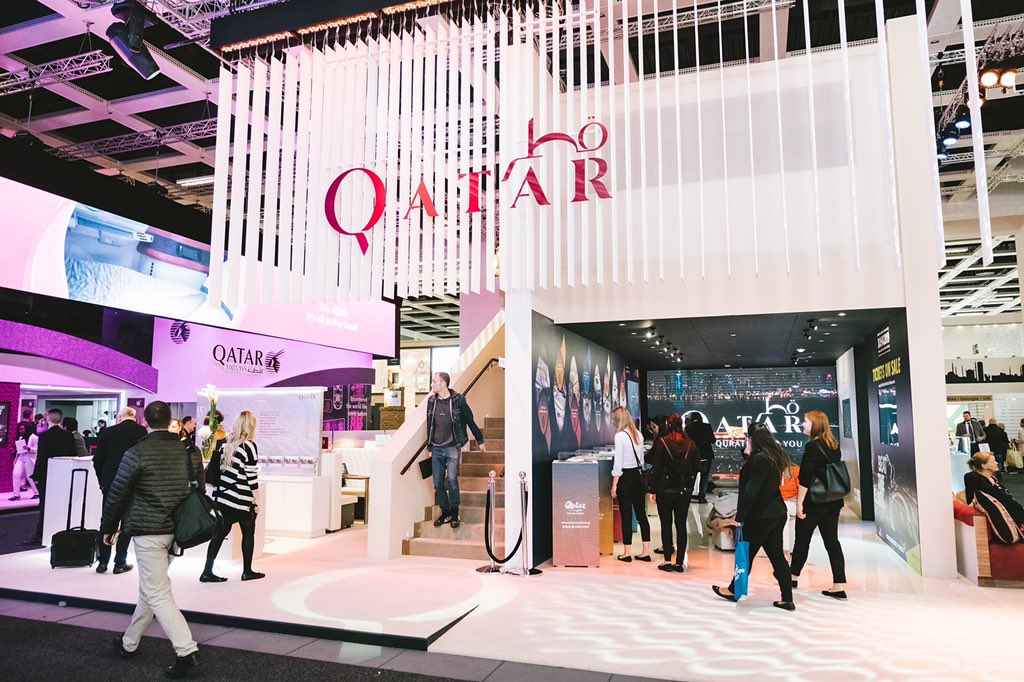 The Berlin International Travel Trade Fair (ITB), the world’s largest and most important annual event in the tourism industry, was launched in Germany’s capital, Berlin.

Present in the event was a delegation sent by the Qatari National Tourism Council (QNTC) made up of 20 representatives from Qatar’s tourism and hospitality sectors including Qatar Rail, National Museum of Qatar as well as the Supreme Committee for Delivery and Legacy which is overlooking the latest preparations set for the 2022 FIFA World Cup. The Qatari exhibition booth had a total area of 222 square meters, where a space was allocated especially for the 2019 World Championship in Athletics.

Participants also included tour trips organizers and tourism service providers as well as leading hotels that contribute in presenting tourist destinations alongside introducing the ever-increasing options provided by Qatar to its visitors and consumers of the tourism industry.

Mr. Rashid Al-Qurese, Chief of Marketing and Promotion Officer at the Qatar Tourism Authority, pointed out that Germany has become one of the top 10 markets exporting tourism to Qatar. He stated that this was due to the strong partnerships agreed upon with a group of leading tour organizers, travel agencies and leading maritime tourism companies in Germany such as Der Touristik Group, Aida Cruise and TUI Cruise.

Al-Qurese also noted that the joint promotional efforts carried out by the German partners alongside Qatar’s recently-launched promotional campaign using the tagline, “Qatar. Qurated For You” have contributed towards promoting Qatar’s unique tourism experiences offered to visitors from German-speaking countries. These countries account for a major market for Qatar’s tourism sector with a 34% growth in 2018 as compared to the previous year, hence, reflecting the increasing numbers of tourists flocking into Qatar from these countries.

Notably, Qatar’s maritime tourism sector witnessed a remarkable growth coinciding with the arrival of the two German ferries; “Mein Schiff” and “AIDAPrima”, to the port of Doha.

Moreover, Qatar’s hosting to major sports events that requires a large participant count such as the World Corporate Games 2019; which Qatar is set to host for the first time in the Middle East, supports the country’s strategy in developing its sport and leisure tourism sector in addition to feeding the sector with new business routes.

From its side, Qatar Airways – Qatar’s national 5-star carrier – plays a role in enhancing Qatar’s tourism sector by connecting Doha to a host of major cities in the German-speaking countries such as Frankfurt, Munich, Berlin, Vienna, Zurich and Geneva; providing 70 weekly flights journeys to these cities.

As for Qatar’s National Tourism Council, its mission is centered around reinforcing Qatar’s position on the world tourism map, presenting it as a leading destination for people all over the world to visit and learn about its tourist attractions in the fields of business, sports, culture and family entertainment. Qatar’s NTC functions within the national strategy set for the tourism sector; aiming at diversifying Qatari tourism products along with enhancing the sector’s contribution in the national sector by the year 2030.

Since the launch of the first phase of this strategy, Qatar’s tourism sector has indeed received more than 10 million visitors with an increase in its total contribution towards the country’s GDP that has reached 6.7%.