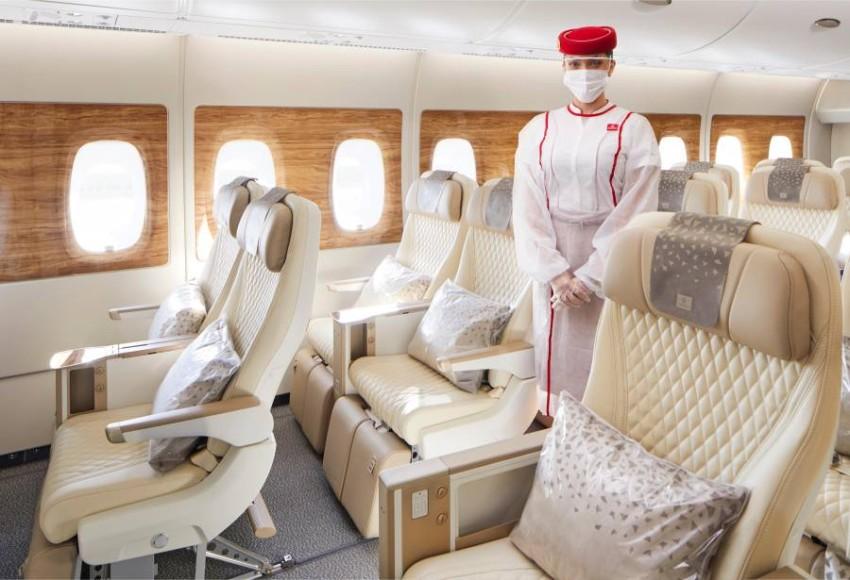 Fly Emirates announced that it will be operating the new “A380” airplane in Heathrow Airport, which will have an excellent economy class along with improved chambers.

Passengers traveling from Dubai to London on Fly Emirates have been able to enjoy the new plane sine 4th January. The first flight, called flight “AK3”, left Dubai International airport an 2:30 Pm and touched down in Heathrow airport at 6:20 pm. While the returning trip, “AK4”, departed from Heathrow at 8:20 pm and arrived in Dubai at 7:20 am the following morning.

The improved economy class in the new aircraft was shown to have wide and comfortable 40-inch seats, as the economy class seats have been replaced with ones similar to the seats in the Boeing «777-300ER Gamechanger».

The transporter has also placed enhancements in the first and business classes, such as the Shower Spa, the Air Salon and adding colorful and new ornament detailing to the chambers.

Until a suitable number of seats is available to put on market, Fly Emirates intends to offer the excellent economy class as a free upgrade for its customers.

You can book your seat in all three classes (first, business, and economy) online through the website or through travel agents.

Fly Emirates has been keen on reclaiming its network gradually over the past months, the airline also came back with their unique land and air shows, with special consideration of health standards for its staff and clients.

The airline has 5 daily trips to London, 4 of which are on the A380, it also runs 10 trips to Manchester on a weekly basis, and a daily trip to each of Birmingham and Glasgow.

Fly Emirates, the flag carrier of the United Arab Emirates, currently has 99 destinations covered on the course of its trips. It provides passengers the ability to travel easily and smoothly to Europe, the middle East, the Americas, Asia, And Africa with a short pause in Dubai.

Facilities, incentives and loans … Golden opportunities to invest in Oman!