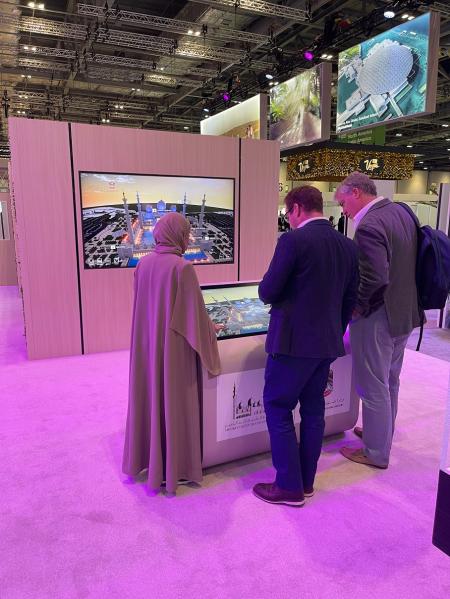 The Sheikh Zayed Grand Mosque Centre participated in the World Travel Market 2021, held in London from 1 to 3 November, within the Department of Culture and Tourism – Abu Dhabi pavilion.

The Center’s participation in the exhibition provided an opportunity for visitors from different cultures to explore the diversified Islamic architecture of the Sheikh Zayed Grand Mosque in Abu Dhabi, as well as its role in fostering cross-cultural communication. It also showcased the Center’s activities and events that reflect its civilized message, which is inspired by the legacy of the late Sheikh Zayed bin Sultan Al Nahyan.

During the event, the Center displayed a model of the Sheikh Zayed Grand Mosque and an interactive screen that highlighted the mosque’s aesthetic details and the messages it conveys in line with the UAE’s approach and values of tolerance, coexistence, and respect. The exhibits also provided an opportunity for a wide range of visitors to learn about the unique Islamic architecture and highlighted the richness of Islamic civilization in different eras.

She pointed out that the Center demonstrated the importance of architectural arts exhibited in the mosque in communicating its civilized message by providing sources and content that highlights the cultural, Islamic and Arab heritage and the authentic values of the UAE.

The World Travel Market exhibition in London, which celebrated its 40th anniversary, in attendance of global tourism industry makers and visitors, is one of the key international tourism exhibitions, as it provides an opportunity for participants to meet and discuss the latest developments in the sector and discuss partnerships and new prospects for cooperation.