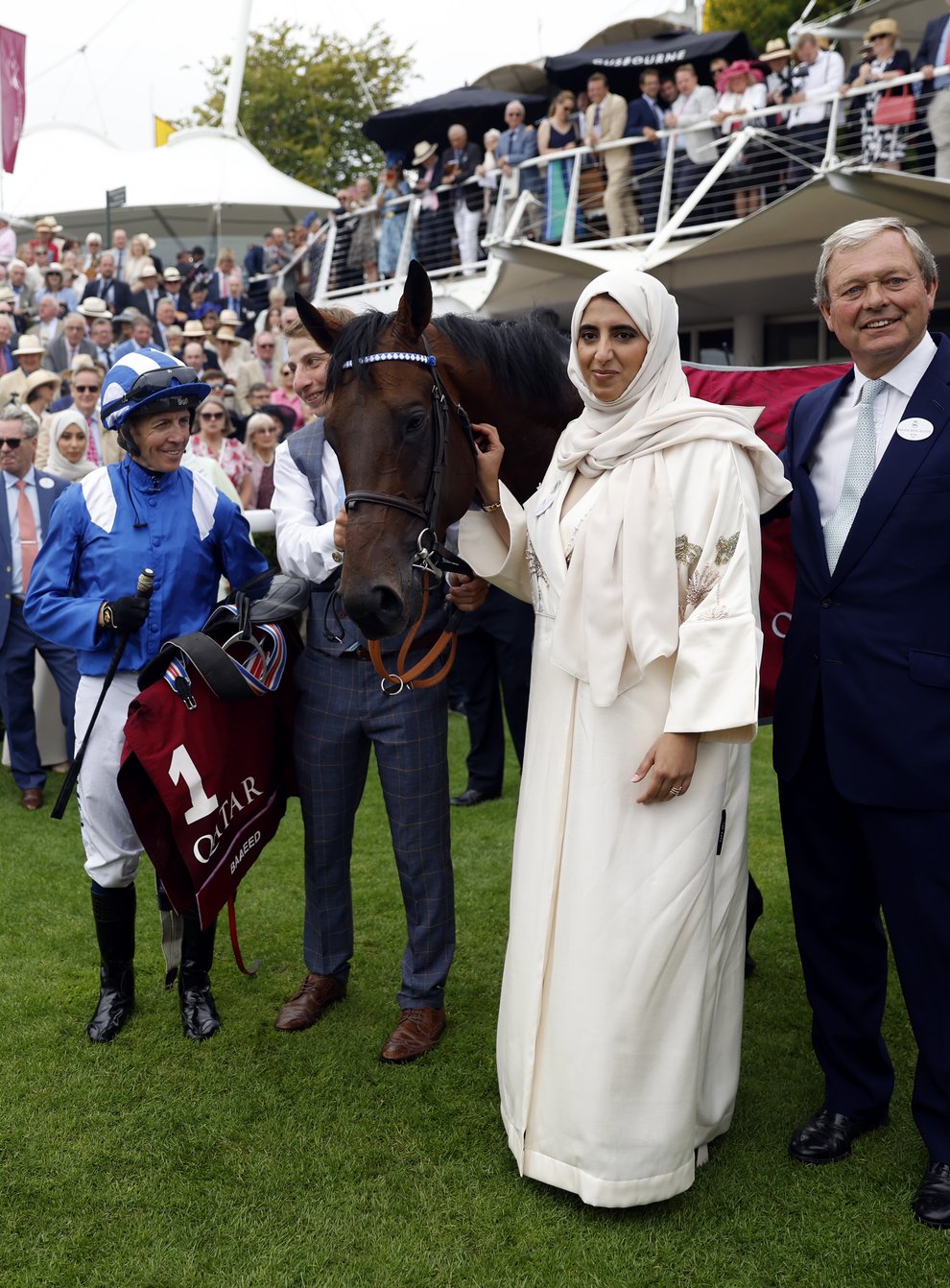 GOODWOOD, UK–Wearing a brooch bearing the image of her late father pinned to her robe, Sheikha Hissa Hamdan Al Maktoum greeted the horse who has become, for her, so much more than just the best racehorse in the world.

As the unbeaten Baaeed (GB) (Sea The Stars {Ire}) returned triumphant for the ninth time, she said, “[He’s in] every conversation, every conversation. He’sķ part of my life now. My father bred him. It’s a 40-year, even longer, process so it just feels very homey and it’s nice to have a horse like him. I’m very lucky.”

The sheikha, in company with friends and family and the longstanding Shadwell racing team of Angus Gold and Richard Hills, watched the 4-year-old colt claim his fifth consecutive Group 1 victory on the big screen in Goodwood’s parade ring, with a cheer going up from her entourage as Baaeed eased down crossing the line. As a long odds-on favourite, the William Haggas-trained colt, poised and at ease in the preliminaries, made it seem so straightforward: the best horse in the race had the perfect run through before being pulled wide in the straight by Jim Crowley and cruising home to win.

It is a scene that must have been played out myriad times in the minds of those closest to him but nothing in racing can be taken for granted, and as Baaeed surged clear to win, the tension among the Shadwell camp seemed almost visibly to dissipate as hugs and handshakes were exchanged.

“I was absolutely nervous but it is always good to see him,” admitted Sheikha Hissa. “We thought he was going to miss this race and go straight to York but we kept him here and it turned out well, but I will always be nervous.”

Though the crowd has seemed a little thinner for the first two days at Goodwood, the tiered banks around the parade ring were packed both before and after the G1 Qatar Sussex S., those present rightly craning for a glimpse of the top-rated horse in the world.

“It’s very heartwarming to see that people love this horse. I feel like it’s a win for everyone really,” said his owner after Baaeed had duly obliged those who turned out to see him by conjuring up yet another victory. It was his second at Glorious Goodwood following last year’s win in the G3 Thoroughbred S., the last time he was seen in anything other than top-level company. His next appearance will be a foray into uncharted territory as he steps up to ten furlongs for the G1 Juddmonte International S. at York.

“A mile and a quarter definitely,” said Sheikh Hissa, confirming that Baaed will be asked to race beyond the mile that has conquered so easily time and again. “He’s ready and I can’t wait to see it.”

She added, “It’s lovely to see a horse who tries and has his ears pricked the whole time. We were discussing whether to run him in the Sussex last year or not but I stated ‘no’, we didn’t want to rush him. So he’s back now and he’s won the Sussex and I’m very happy.”

Sheikha Hissa is all too aware of the legacy of her father’s bloodstock empire, which over four decades was responsible for 19 European Classic winners from an initial winner in Britain in July 1980. One of the cornerstones of the operation’s broodmare band from its earliest days was Height Of Fashion (Fr) (Bustino {GB}), whose high-achieving offspring include the Derby, 2,000 Guineas, and King George winner Nashwan (Blushing Groom), and whose influence is felt still through her fifth-generation descendant Baaeed. That continuity of bloodline could well provide a foundation of a different form for Sheikha Hissa’s tenure at the helm of Shadwell with the eventual stallion career of Baaeed.

It is an eventuality which has already been alluded to by William Haggas, and Angus Gold, Sheikh Hamdan’s racing manager for 25 years who now performs that same role for his daughter, spoke of the importance of Baaeed to a new-look, slimmed-down Shadwell.

“From a breeding point of view he’s such a valuable proposition now. We have a new, fledgling operation and for Sheikha Hissa and her family he is so important to that,” Gold said. “If we are lucky we will have him for 16, 17, or more years, however long it is if everything goes well.

And if he happened to be a successful stallion he is so important to our operation that we need him to be breeding rather than to keep racing, I would imagine, but that is not my decision obviously. We will see what the family decide.”

He, too, is looking forward to Baaeed being tried over a new distance.

He, too, is looking forward to Baaeed being tried over a new distance.

Gold said, “He’s so relaxed in his style of racing that he will give himself every chance of getting it. Jim [Crowley] said just now that when he got towards the line and he heard the crowd cheering he just pricked his ears and almost pulled himself up. I don’t see any reason why he can’t go further, and I would be amazed if it’s lack of stamina that beats him.”

As Sheikha Hissa applauded her champion’s departure from the winner’s enclosure and the presentations were completed, Gold admitted to a sense of relief after Baaeed had again maintained his spotless record.

“For me, almost the most special thing is that it’s a culmination of all Sheikh Hamdan’s work in trying to breed an absolute champion,” he added. “We were lucky in the early days with Nashwan and Dayjur and some really good horses, but this horse is a fifth-generation homebred from Height Of Fashion, whom he adored and got him going early on in the breeding world, so to have this horse 40 years on is really special. I’m so thrilled for Sheikha Hissa, and for her family. They had a hard time last year without him, and for this horse to suddenly appear, it’s almost like he was sent.”

Saudi Arabia’s booming economy: How the kingdom is outperforming the global growth outlook