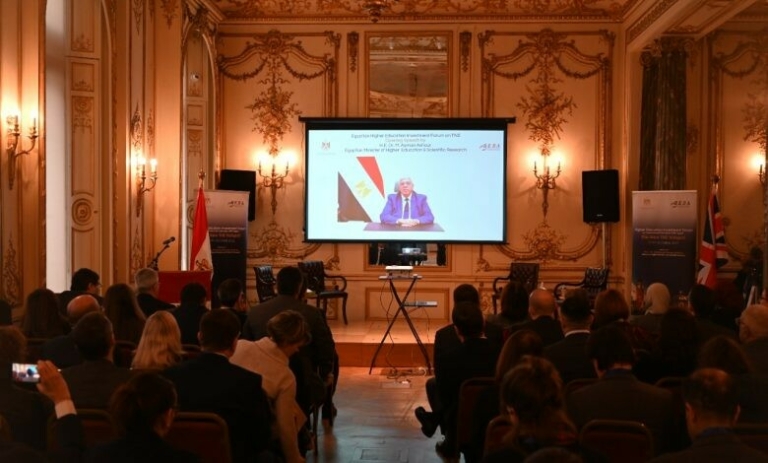 The activities of the Higher Education Investment Forum to encourage cross-border education between Egypt and Britain were concluded, as the British Minister of Foreign Trade, Andrew Bowie, met with the Egyptian Minister of Higher Education and Scientific Research, Ayman Ashour.

This happened in the presence and participation of Douglas Blackstock, President of the European Association for Quality Assurance in Higher Education (ENQA), and Elizabeth White, Director of the British Council in Egypt. In addition to Mark Cross, International Education Consultant and Assistant Director of Global Policy and Engagement at British Universities in the United Kingdom (UUKI), and Vicki Stott, Chief Executive Officer of the Quality Assurance Authority for Higher Education (QAA).

During the activities of the forum, Dr. Ashour participated in the activities of the second session, which revolved around (developing opportunities for cooperation between Egypt and the United Kingdom in the fields of higher education and scientific research for education across borders). The second session included several topics such as studying the market needs of Egyptian and British higher education institutions and working to achieve them, the impact of digital transformation on investment in higher education, and investment in higher education and its relationship to future jobs. As well as developing the capabilities of faculty members, facilitating student exchange, developing mechanisms for the internationalization of higher education at the institutional level, studying ways to provide the necessary funding and support, in addition to creating opportunities for exchanging experiences and research in areas of common interest.

In the closing session a presentation of some successful models in the field of investment in cross-border education in Egypt and the United Kingdom was presented. And it was attended by Professor Quentin McKellar, President of the University of Hertfordshire, Dr. Hassan Abdullah, President of the University of East London, and Dr. Mahmoud Abdel Qader, Chairman of the Board of Trustees of European Universities in Egypt (EUE), and Dr. Rasha Kamal, Cultural Attaché at the Egyptian Cultural Office in London.

It is worth noting that representatives of 36 British universities participated in the forum, in addition to the representatives of the Department of Education and Foreign Trade, the British Council in the United Kingdom, the Quality Assurance and Accreditation Authority for British and European Universities, and the International Council of British Universities.