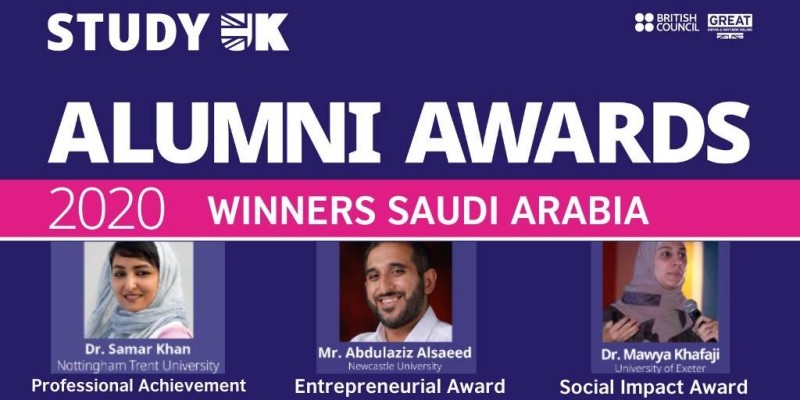 The British Embassy in Riyadh and the British Council in the Kingdom announced the names of Saudi students who won awards for graduates of study in the United Kingdom for the years 2019/2020, during a virtual awards ceremony held on Wednesday in Riyadh.

The UK graduates from all over the Kingdom were honored for their outstanding achievements as professionals in business and entrepreneurship and as community leaders, and for their important contribution to strengthening cooperation bonds between the United Kingdom and the Kingdom of Saudi Arabia, and following in-depth interviews with the jury, the winners were selected for the three categories of awards: Professional Achievement Award, Entrepreneurship Award, and Social Impact Award.

The Professional Achievement Award, which honors distinguished graduates for their exemplary leadership in their professional field, was awarded to Dr. Samar Khan, lecturer, and researcher in the fields of energy security and renewable energy. Khan graduated from Nottingham Trent University in the United Kingdom and is currently an assistant professor in the Department of Entrepreneurship and Dean of the College of Business at Effat University.

The Social Impact Award, that honors graduates who have made exceptional contributions to creating positive social change was also presented to Dr. Mawia Khafaji, an alumnus of the University of Exeter.

Khafaji established the volunteering office at the King Abdulaziz University Hospital, which contributed to increasing the active participation of students in their communities through volunteering, in line with the goals of Vision 2030, and in October 2019, the office celebrated spending 200,000 hours in the field of volunteer work.

As for the Entrepreneurship Award, which sheds light on graduates who have played a pioneering role in innovation or creative solutions, it was presented to Abdulaziz Al-Saeed, a graduate of the University of “Newcastle”, an educational entrepreneur who founded the online social learning platform known as Noon Academy. Noon has already educated up to 4 million students so far and aims to educate 50 million students by 2023 to provide high-quality education available to all.

On this occasion, the Kingdom’s ambassador to London, Prince Khalid bin Bandar bin Sultan, shared a video statement in which he said to all the students: “You are a sign of the success of this relationship. You have proven that you are distinguished, and you have shown the British people what it means to be Saudis.”

Related Topics:businessSaudi students in the UK
Up Next