Oxford .. Gold scholarships for Arab students and opportunities to study

In the Guardian’s annual University Guide published in September last year, Oxford was ranked first due to employment data that demonstrated that many Oxford graduate students get graduate-level jobs after completing their studies.

Oxford has outperformed other world universities in a number of subject rankings, including English, Law, Physics and Economics, as Oxford’s strong value-added performance is credited by its students and the university’s dynamic selection process.

Oxford, the oldest and most famous university around the world, has graduated 26 British Prime Minister and 50 Nobel Prize winners.

It should be noted that Britain is the most important European choice for international students to study, especially Oxford. This is why the University of Oxford has worked to provide financial support and assistance to international students wishing to study in the United Kingdom through several options, including scholarships, partial scholarships, financial rewards and more.

British higher education is well regarded worldwide for its quality and strict academic standards, as Britain is home to the world’s most prominent higher education institutions. Prestigious Oxford University seeks to host and attract the best and brightest international students in the world, through a variety of scholarships subsidies, partial grants and financial rewards, across all disciplines; from humanities, medical sciences, sports, arts and law to the natural sciences, computer science and many other fields.

The following are the most prominent scholarships offered by Oxford University for Arab international students:

It is a fully-funded scholarship provided by the University of Oxford to study as an undergraduate. The scholarship covers all costs for students selected to receive the scholarship, including course fees, living grant costs, airfare and return each academic year.

The Reach Oxford Scholarships are also known as “Oxford Scholarships” and intended for international low-income countries’ students who cannot study for a degree in their own countries for political or financial reasons or lack suitable educational facilities.

International students who apply for this type of scholarship must have financial need, a distinguished previous academic record, and their commitment to return to their homelands to change their society for the better and build intellectual and educational capabilities.

Scholarships to study for a masters in the United Kingdom

This scholarship is available to international graduate students at the University of Oxford. It was established through a new funding initiative with the aim of creating fully funded scholarships for distinguished graduate students of the highest academic levels from all over the world.

This program was established in 2015 thanks to generous donations from several donors to celebrate the 95th birthday of Lord Weidenfeld.

International students who apply for this scholarship have to prove their scientific and professional competence, matching the criteria for applying for the grant. The student has to intend to return to his country as soon as he finishes studying and training. He or she must also be able to demonstrate a link between their academic specialisation and professional goals in the long term and explain how they see their work or profession contributes to improving life in general in their country of origin, or at the regional and international levels.

This scholarship is for masters and doctoral studies at the University of Oxford, awarded to students who enrol for a full-tuition commitment. The scholarship covers the full tuition fee. Scholars qualifying for the scholarship will also receive an annual grant to cover living expenses of not less than the minimum of Research Council PhD rates which is usually sufficient to cover the living costs of one student living in Oxford.

Clarendon Scholarship does not just offer over 130 new fully-funded scholarships each year to assist outstanding graduates; it also provides the opportunity to join one of the most vibrant, international and interdisciplinary societies in Oxford.

Oxford Islamic Studies Centre offers scholarships that enable university graduates to pursue their academic studies to benefit the Islamic world, where the centre is a meeting point between Western and Islamic science. This scholarship is awarded based on the academic merit of international students.

This scholarship is available for all majors at the University of Oxford. The qualified international student must choose to specialise in an IS-centred field, one that is related to Islamic traditions or would benefit the Islamic world.

The Oxford Center for Islamic Studies is an independent centre accredited by the University of Oxford. The centre was established in 1985.

According to its website, it ‘is dedicated to the study, from a multi-disciplinary perspective, of all aspects of Islamic culture and civilisation and of contemporary Muslim societies.’

The University of Oxford, through an outstanding group of scholarships for international students from all over the world, aims to provide exceptional education, conduct world-leading research, and make significant contributions to society, locally, nationally and internationally.

The university’s extensive global links have been developed to serve these principles.

Oxford University’s history and influence make it one of the most prestigious universities in the world.

Oxford: An Icon of British Universities

The University of Oxford’s roots date back to the end of the 11th century, and it continues to attract the attention of students from around the world.

As well as being the the oldest university in the Western world, it is also one of the finest, ranked first in the United Kingdom, based on the Times University Ranking Index.

The University of Oxford is one of the British research universities in the Russell Group and in the Cumbra Group, which is an advanced European universities network.

The University of Oxford is home to one of the most important medical schools in the United Kingdom, formally established between 1220-1255. Oxford’s museums and collections are world-famous, providing resources to all scholars worldwide and are visited by more than a million people annually.

There are 38 colleges in Oxford that are independently administered and the Collegiate University System has given Oxford University its success.

It is possible to meet in a large organisation and even more minor disciplines and work collaboratively to exchange ideas.

The university is also known for its many facilities, including its library, information technology, housing, care and support, sports and social events.

A relatively small number of students in each college give adequate attention to the definition, academic development, and individuals’ well-being.

The university is working during the world Corona epidemic spread, based on advice from sources including the Ministry of Foreign Affairs, Commonwealth Affairs, the World Health Organization advice. It works in line with current developments and regulations in Britain regarding Coronavirus spread.

The University of Oxford moved to the third phase of the Business Continuity Planning Framework on January 5, 2021.

This means that while university and college buildings will remain open for work and research, teaching and learning must take place online for the time being.

In a recommendation published by the university on its website, it said: ‘The health, safety and well-being of our staff, students and the wider community are our top priorities for the 2020/21 academic year.

Things will be different this year, and we will all need to make adjustments to the way we live and work. Despite all this, we continue working to build and maintain a community of scientists and students who come together to learn, research, and improve the world around us.

Our health campaign in response to COVID-19 was created under the guidance of medical and behavioural experts at the University of Oxford and with the insights input from department fellows Colleges. The university will remain committed to strengthening its mission of teaching and research throughout the COVID-19 pandemic.’

Why study in Oxford – UK? 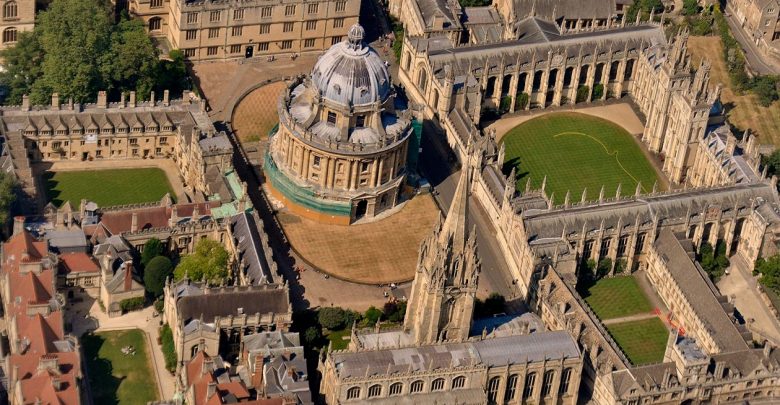 Once an international student obtains a degree from the University of Oxford in the United Kingdom, that student will possess the key to professional success.

Because the United Kingdom is home to a group of the oldest universities and colleges in the world dating back to the 12th and 13th centuries AD, education in the United Kingdom has become an important yardstick for measuring educational levels in other countries.

Practical knowledge based on the practical application of any theoretical knowledge is the British method of choice. It enables the student to acquire critical thinking and analysis skills, as well as creative ability in the academic specialisation.

There is a Quality Assurance Agency (QAA) in Britain, an independent body that sets standards for the education system in all British universities and colleges.

This is in addition to verifying their performance through evaluation and review processes, which help determine the best educational means and ensures that all students receive the best quality in the fields of education and research.

The study programs in Britain are characterised by their shorter duration than many other countries, which means that the student will graduate earlier than his colleagues in another country without affecting the quality of education received.

4- Ability to work while studying

The student can work part-time for up to 20 hours per week during the semester or work full-time during the academic holiday.

Students are able to obtain free treatment while studying in the United Kingdom through the National Health Service (NHS).

The UK is the second most popular destination for students in the world, according to the QS World University Rankings (QS), due to the quality of higher education and the efficiency of universities in Britain where international students have the opportunity to learn from the best academics and experts.

In a world where globalisation continues to spread, obtaining a degree from abroad has great advantages that benefit international students in their professional lives and personal experiences.

It helps them take part in the development and growth to build ancient civilisations in their countries.

Inside Ruba Shamshoum’s Mind: a breath of fresh air in a crowded industry

Hilton Salwa Resort .. Qatar amazes the world and the UK