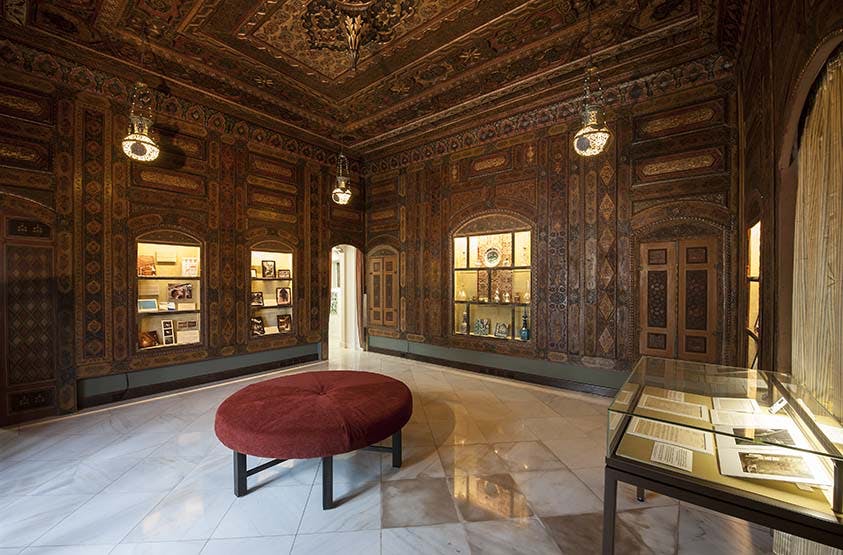 The turmoil in Syria has been much in the news lately. With the opening of our Damascus Room, we hope to make visitors aware of this nation’s rich cultural heritage by letting them experience the world of 18th- and 19th-century Damascus.

During the later years of the Ottoman Empire (1299-1923), when this room’s paneling was originally created, Damascus was a bustling and cosmopolitan trading center. Well-to-do residents entertained their guests in reception rooms generally known by the Arabic word qa‘a (hall) that featured elaborate ‘ajami woodwork (in which a raised surface of animal glue and gypsum was painted and then further embellished with metal leaf and/or mirrors) and luxury trade items such as textiles, glassware, ceramics and metalwork.

Shangri La’s Damascene interior was acquired from the Damascus- and Beirut-based firm Asfar & Sarkis (with whom Duke had been working since the 1930s) in 1953. The interior was then retrofitted by the al-Khayyat workshop of Damascus so that it would fit in the former “Spanish Room” at Shangri La. Doris Duke began installing the room in 1955, and it continued to serve as a guest room for nearly 40 years.

Over time, the temperature and ocean breezes, which make Shangri La such a pleasant place to visit, take their toll on buildings and objects. Thanks to the Winterthur/University of Delaware Program in Art Conservation (WUDPAC), the Damascus Room has undergone extensive conservation work, which identified and addressed areas of loss and damage. Now that treatment of the room is complete, we’ve decided to make it a part of our regular public tours. In fact, we’re proud to be one of only a handful of institutions that exhibit—and allow visitors to walk into—Syrian interiors of this type.

In planning and installing this exhibit, one of the biggest challenges we faced was working with the historic vitrines. How were we going to install shelving without drilling holes through the original wood? And how were we going to protect the delicate objects on display in the east vitrine? Luckily our team came up with some innovative solutions: We used velvet-covered boards to support both ends of the glass shelves, and we slid multiple panels of glass (rather than a single large panel) into the object vitrine.

Improvisation was indeed the name of the game. Conservator Kent Severson and consulting textile conservator Ann Svenson devised a method of hanging textiles inside the vitrines. They also suspended our photos and interpretive labels from the glass shelves using dabs of silicone and monofilament thread (dental floss was even considered, albeit briefly).

We all did our best to work with the room’s changing light, and its variable temperature and airflow. We hope that the resulting exhibit, which features archival displays (facsimiles and originals), as well as a range of textiles and objects that reflect both Doris Duke’s collecting interests and the domestic practices of late-Ottoman Damascus, will give you a taste of this elegant and fascinating world.