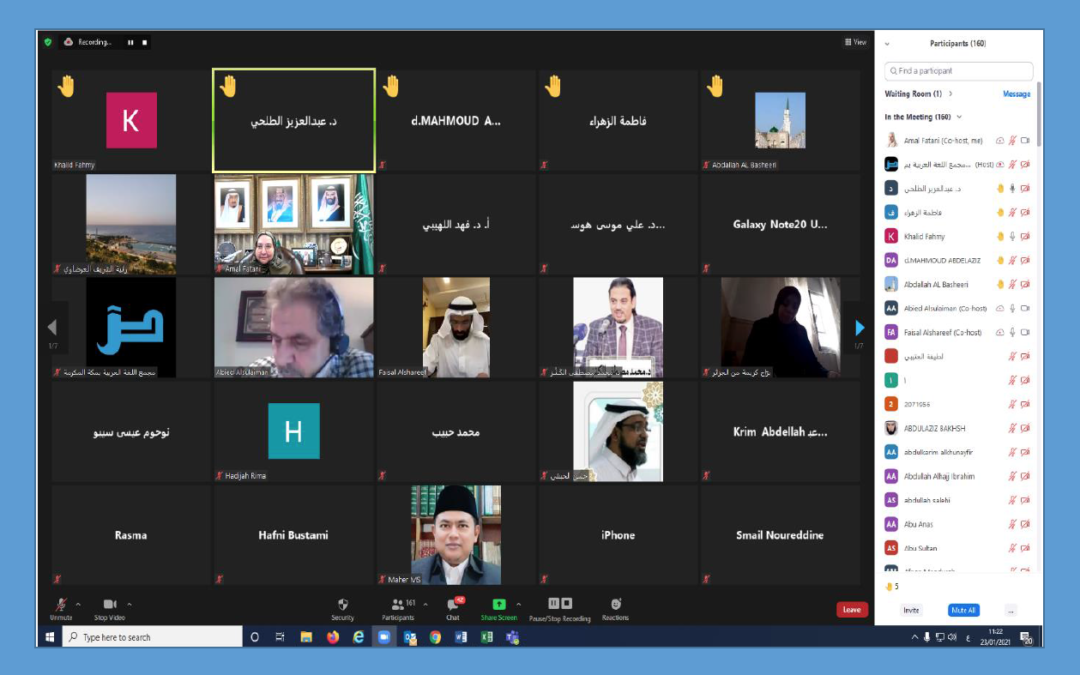 In cooperation with the Arabic Language Academy in Makkah Al-Mukarramah, the periodic programs of the London Literary Salon were launched at the Cultural Attaché in London on Saturday, January 23.

This was in honour of Her Excellency Dr Amal bint Jamil Fatani – Cultural Attaché of the Embassy of the Kingdom of Saudi Arabia to the United Kingdom.

The event included an opening speech by His Excellency the Cultural Attaché. She welcomed the attendees and praised the cooperation of the Arabic Language Academy with the Attaché in organizing this meeting and dealing with this important topic.

She also thanked His Excellency, the President of the Society, Prof. Dr Abdulaziz Al-Harbi, and the members and employees of the Society, expressing her gratitude for the opportunity to cooperate and display Arab culture and contribute to making its pioneers and establishing roots among the creative scholarship students in foreign countries.

Her Excellency also thanked the efforts of everyone who contributed to planting the seeds of the London Literary Salon, recalling the memory of a salon founded by the late Dr Ghazi Al-Qusaibim during his tenure as the ambassador of the KSA to the UK.

She recalled the importance of bringing to mind that era, which was diverse, generous, and influential inside and outside the homeland.

His Excellency Dr Faisal Al Sharif presented the event, welcoming her Excellency the Attaché, His Excellency the President of the Complex, the guests of the meeting, and everyone from the community’s pioneers, as well as the male and female students.

He praised the inclusion of the periodic programs of the London Literary Salon in this periodic meeting of the Arabic Language Academy in Makkah. In turn, he explained that the London Literary Salon began in the 90s of the last century during the era of the Minister Ambassador, his Excellency Dr Ghazi Al-Qusaibi, and His Excellency, Professor Abdullah Al-Nasser, the Cultural Attaché at the time.

He stated that, under the direction of her Excellency the Cultural Attaché, ‘We are now resuming the work of the London Literary Salon and launching its programs again to contribute to the spread of Arab culture through Saudi hands and to enhance its global glory with the contribution of a group of students of the nation in British universities and educational institutions.’

He expressed his happiness with this cooperation that aids a mutual beginning, drawing on culture from its source and inspired by thought from its pioneers, who are members and pioneers of the ancient Makkah Arabic Language Academy with the depth of its experience and the richness of its programmes.

The activities began with a scientific meeting entitled: “The importance of employing comparative linguistics in composing the historical dictionary of the Arabic language”. Dr Abdulrahman Al-Suleiman, a member of the Society and Professor of Translation at the University of Louvain in Belgium, spoke at the meeting, offering knowledge about Arabic dictionaries and linguistics. He followed with a Q&A period for participants

The meeting was held online via the Zoom platform, with the number of attendees reaching 170 participants.

Related Topics:Kingdom Saudi ArabiaKsaSaudi AttacheSaudi English relationsThe “London Literary Salon” launches in the UK with a Saudi mark
Up Next