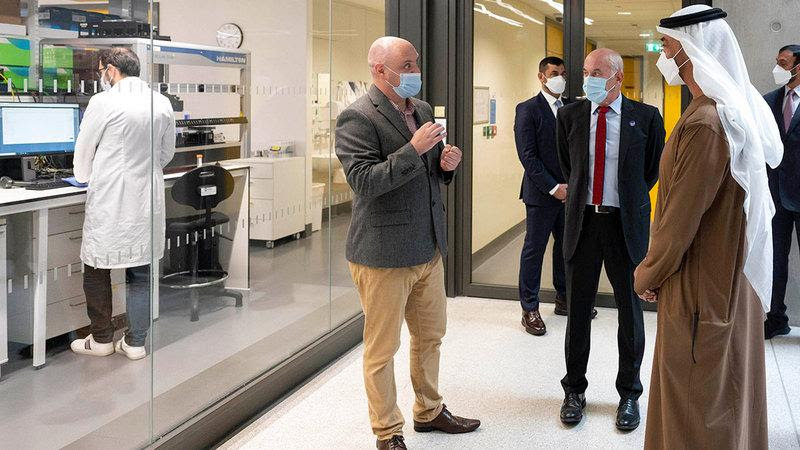 His Highness Sheikh Mohamed Bin Zayed Al Nahyan, Crown Prince of Abu Dhabi and Deputy Supreme Commander of the Armed Forces, visited the Zayed Center for Research in Rare Diseases in Children in London on the sidelines of his visit to the United Kingdom.

During a meeting with the doctors, professors and researchers working at the center, Sheikh Mohamed was briefed about the center’s research and innovative treatments it offers to save the lives of sick children in different countries of the world.

Sheikh Mohamed was briefed on the unique model of pediatrics adopted by the first of its kind in the world, which combines cutting-edge research with world-class medical care under one roof, helping to accelerate the diagnosis and treatment of rare diseases affecting children.

Sheikh Mohamed toured the main laboratory, including 140 test benches that accommodate researchers to conduct studies and research, and the genomics team laboratory.

He was briefed on the center’s specialized facilities that played a vital role in the global response to the challenges of the Covid-19 pandemic.

His Highness in a tweet on «Twitter» remarked after his visit to the center yesterday: “I have been briefed during the visit to the Zayed Center for Research in Rare Diseases in Children . . . on innovative treatments and leading research conducted by the center to save the lives of patients. My thanks and appreciation for doctors, researchers, nursing staff and personnel, for their dedication to helping sick children from around the world.”

The unit for studying disease-causing genes had recorded the sequence of 15,500 genome samples that cause the Covid-19 virus in order to inform scientists about the changing nature of the virus.

He also learned from those in charge of the Zayed Center for Research in Rare Diseases in Children the importance of specialized and advanced research rooms, which represent the largest academic unit for the development of gene therapy and cell therapy in the UK and one of the largest facilities in the world for the production of materials used in pioneering gene therapy experiments.

His Highness also had the opportunity to thank Mohamed Al Ameri, a ZCR Researcher and Ph.D. candidate of Epigenetics of Pediatric Leukaemia Diagnostics, UCL, for his pioneering research into how a person’s DNA is altered in cancer cells, highlighting that this work has the potential to not only benefit cancer patients in the United Arab Emirates but also worldwide.

While at the Centre, His Highness met Ali Hamed Al Ketbi, a 10-year old patient who is improving steadily as he undergoes treatment at Great Ormond Street Hospital.

Sheikh Mohamed wished Ali well, and expressed his gratitude to the hospital staff for their kind and expert care, emphasising the value of helping sick children, particularly those who are far from home, can never be underestimated.

The Center, which will celebrate its second anniversary in November, is a partnership between Great Ormond Street Hospital (GOSH), University College London and Great Ormond Street Hospital Children’s Charity, and was made possible thanks to a generous ₤60 million gift in 2014 from HH Sheikha Fatima bint Mubarak Chairwoman of the General Women’s Union, President of the Supreme Council for Motherhood and Childhood, and Supreme Chairwoman of the Family Development Foundation.

Related Topics:arabiskMohamed bin Zayed
Up Next