Queen Elizabeth II's meetings with Arab leaders through the years 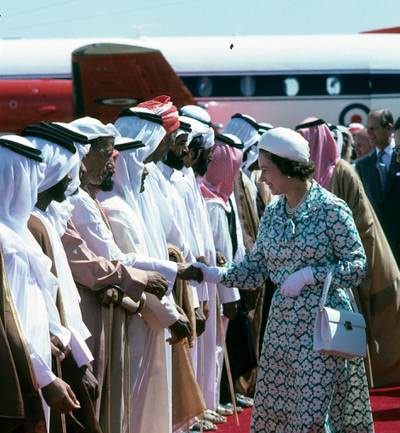 During her 70-year reign, Britain’s Queen Elizabeth II met with the Arab world’s most powerful leaders and monarchs.

Until her death on Thursday aged 96, the queen was the oldest monarch and head of state in the world.

Buckingham Palace announced the news hours after it was confirmed she was placed under medical supervision at Balmoral in Scotland.

the Middle East and Gulf and their friendship dates back decades.

No other British royal has had a platinum jubilee like the queen, who acceded the throne on February 6, 1952, after the death of her father, King George VI.

As the world bids farewell to the British royal, here is a look back a her most notable meetings with top Arab officials and monarchs.

The last king of Iraq, King Faisal II, met the Queen when he visited the UK in July 1956. Two years after the meeting, the Iraqi king was shot dead alongside other members of the royal family in a coup that established Iraq as a republic.

He had maintained close ties with the UK as he studied at London’s prestigious Harrow School, alongside King Hussein of Jordan. 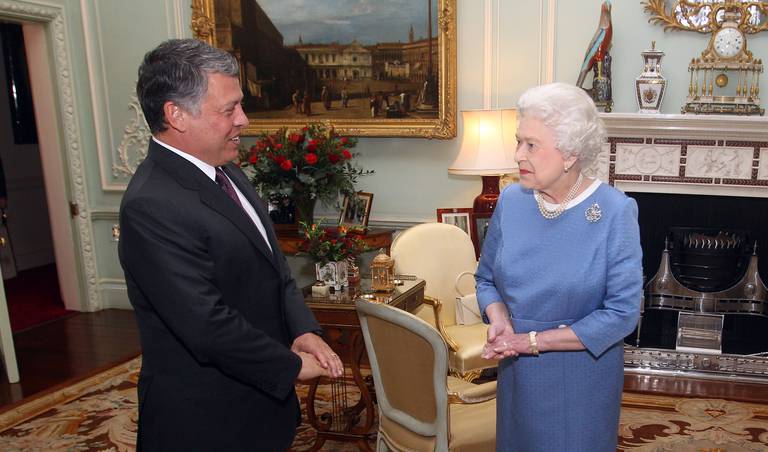 The Queen visited the Middle East on several occasions.

Jordan has close relations with the UK for many years. For decades, strong ties have been held between the two royal families. Jordan adopted its constitution in 1952, as the queen’s reign began.

She met King Abdullah on several occasions, including at Buckingham Palace in November 2011. She also met his father King Hussein several times.

Her most notable state tour of the region was in 1979 when she visited the UAE, eight years after the unification of the emirates in 1971.

It was part of her six-nation tour of the Gulf. 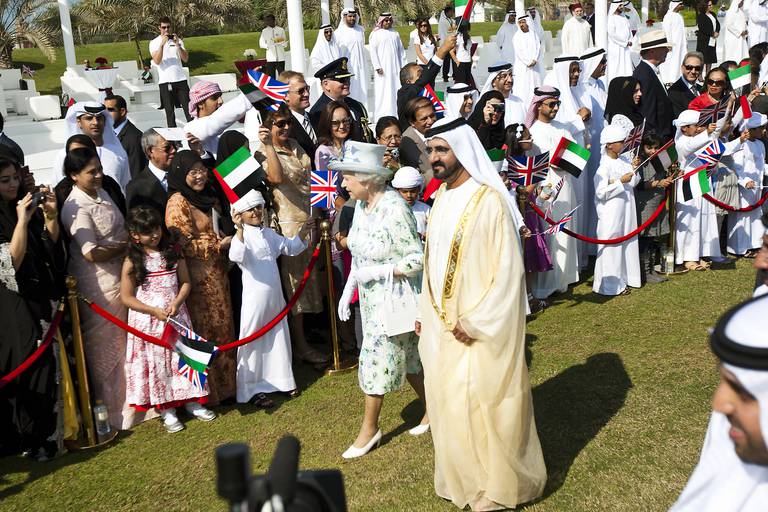 After the arrival on her royal yacht the queen was greeted by the UAE’s Founding Father, the late Sheikh Zayed bin Sultan Al Nahyan, and was taken on a tour of a new municipality building and Jebel Ali port. Sheikh Zayed then paid a state visit to Britain in 1989.

Two decades later, in 2010, the queen returned to the UAE.

In October 2007, the queen hosted a state banquet at Buckingham Palace for King Abdullah of Saudi Arabia at the start of his state visit to the UK in London, England.

For the north African region, the queen and her husband, the late Prince Philip, met King Idris of Libya at the Royal Palace in Tobruk in May 1954.

In 1980, the British monarch paid a visit to Tunisia, Algeria and Morocco alongside Prince Philip.

The queen visited Tunis and met Habib Bourguiba, Tunisian president at the time, during a state visit in October 1980.

They also met Chadli Bendjedid, Algerian president at the time, during a three-day state visit to the country in October 1980.

The queen met King Hassan during her visit to Morocco in the same month.

Related Topics:arabiskQueen Elizabeth
Up Next